Emergency situations involving unknown chemicals can be challenging. Most times advanced chemical identification equipment can readily identify the material involved, allowing first responders to clear the scene appropriately. However, speaking with Hazmat emergency crews from around the US we confirmed that they were only able to successfully identify the chemical 80-85% of the time. In the remaining 15-20% of incidents, teams were forced to take action based upon incomplete information.

Some of the most basic information Hazmat teams can gather uses paper tests to access information like pH, the presence of fluorine, oxidizers or chemical warfare agents. This first pass can guide responders to an initial response, however, more advanced chemical analysis further safeguards responding personnel and the public. Analyzers like the ThreatID, from RedWave Technologies uses Fourier transform infrared (FTIR) spectroscopy to compare an unknown sample to a library of known chemicals. Most of the time the combination of software analysis and comprehensive libraries gets the job done, but even in a situation where no library match is found, FTIR can still provide characteristic features of the molecular components present in an unknown sample – including complex mixtures. Understanding the core components of a chemical helps guide responders to the potential dangers that may be involved and response options.

FTIR spectroscopy measures the amount of infrared light absorbed by chemicals which gives rise to a series of peaks and valleys - the infrared spectrum. Each chemical gives rise to a unique infrared spectrum, just like a persons’ fingerprint is unique. FTIR analyzers take advantage of this uniqueness by matching them to spectra in a library database. Many times, however, mixtures or chemicals not in the database are not identified during routine analysis. The ThreatID provides software which in the event of a failed library match allows users to identify functional groups present in a material.

Functional groups are characteristic parts of a chemical that give rise to predictable chemical and physical properties. A very common functional group are the hydrocarbons, classified by carbon-hydrogen bonds (C-H) which have predictable properties such as the ability to burn, the inability to dissolve in water, and being less dense than water. Knowing these properties allows the emergency responder to act appropriately in the event of fire (foam selection), and tactics to use when waterways are affected (booming for example). Chemicals that are only made up of hydrocarbons are commonly found in our everyday lives as fuels, solvents and common chemicals (methane, propane, hexane, octane, benzene, toluene, and the like). Most hydrocarbons are combustible, water insoluble, and often relatively nontoxic. In contrast, other materials such as cyanide salts, characterized by carbon triple bonded to a nitrogen, are well known to be very toxic. It would be ideal if we could detect these types of functional groups even in the absence of a library identification. 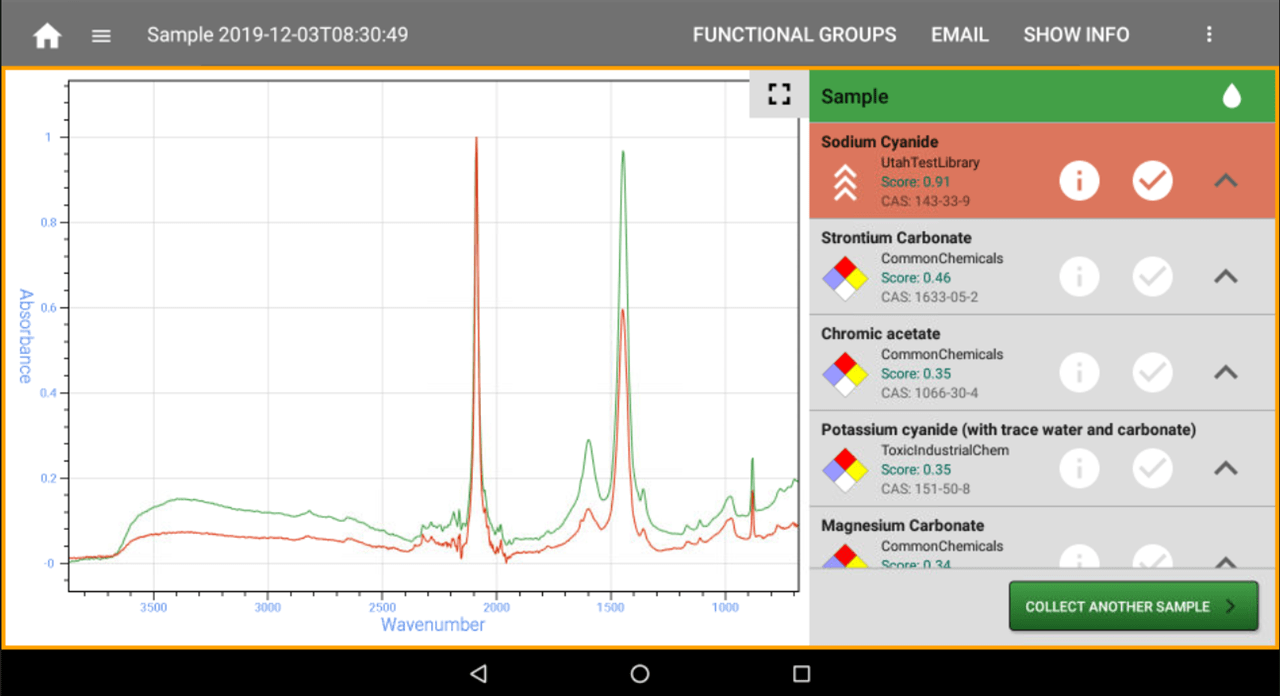 Although many materials contain only a one or two functional groups, mixtures and complex materials like pharmaceuticals, illicit drugs and some polymers may contain several. Mixtures are especially likely to be misidentified with FTIR spectroscopy since the right mix of chemicals can generate an infrared spectrum that mimics another chemical. Take lacquer thinner as an example which contains a variety of liquid materials in varying concentrations. 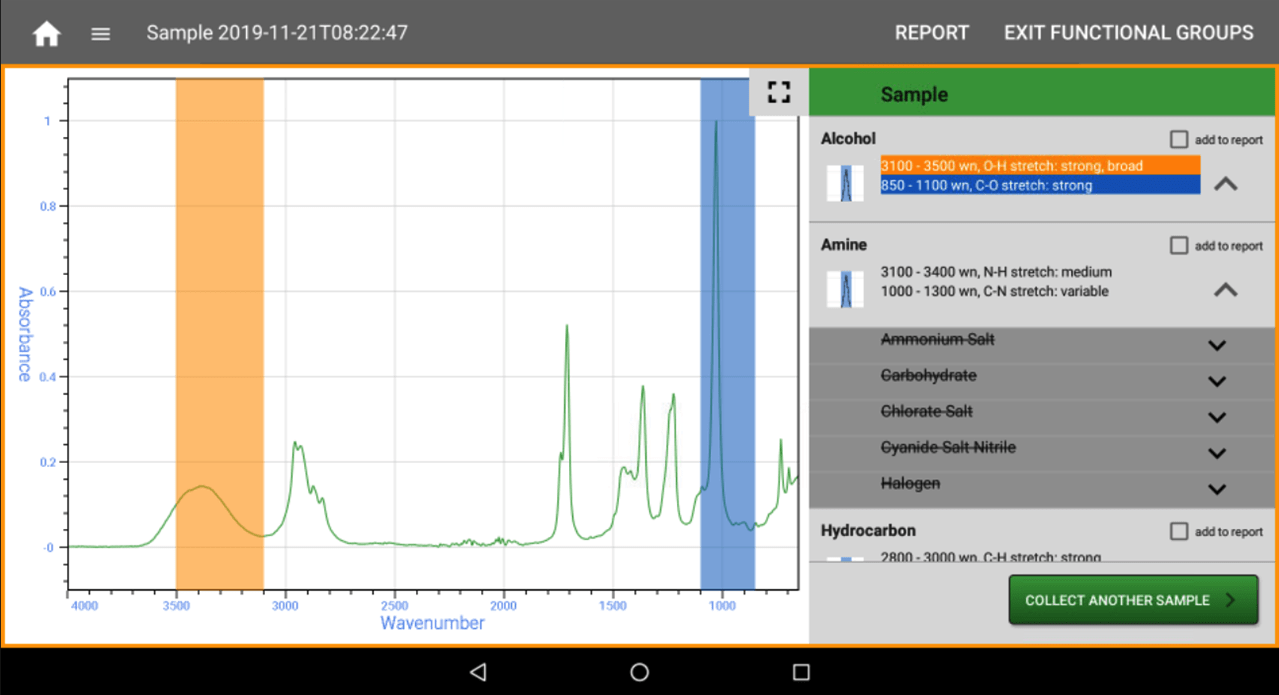 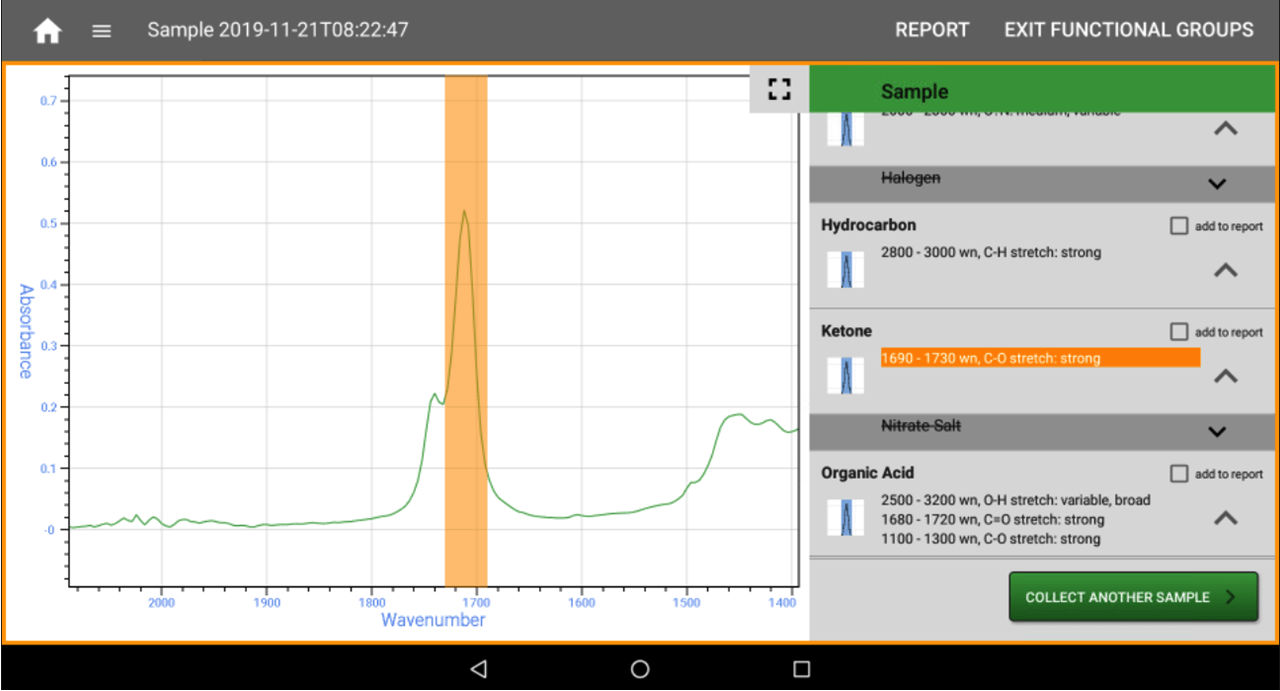 Above images: Functional group analysis of a commercial lacquer thinner on ThreatID

The functional groups identified in this sample are alcohols, ketones, hydrocarbons and esters. Materials which consist of primarily alcohol and hydrocarbons would be expected to be flammable and the addition of a ketone could mean a portion of the sample is volatile and may have a wide flammable range. The alcohol and ketone also indicate the material will likely be water soluble, in contrast to the simple hydrocarbon discussed previously. Using the information provided by the FTIR functional group analysis in combination with other detection equipment results in a much higher understanding of the chemical properties in play even without knowing the identity of the chemical. This allows the emergency responder to make informed decisions when choosing mitigation strategies and tactics. 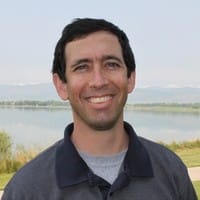